on the Nicoya Peninsula

Originally, the land areas along the Pacific coast of Central America were covered with species-rich tropical dry forest. Today, this original vegetation is nearly completely gone, as the forests have fallen prey to clear cutting.

Also the province of Guanacaste in Costa Ricas’ Northwest has extensive cattle pasture on what was previously a primary forest area. Even steep slopes were not spared with the logging. The environmental sins of the past have grave consequences: Soil destruction through erosion, dramatic floods during the rainy season, and water scarcity during the dry season are direct consequences of this development.

Thus, a reforestation of this region, at least partial, is urgently necessary. However, it should comply with ecological criteria and not have as its goal the creation of monocultures with exotic tree species.

Project Monte Alto: Reforestation in the Headwaters of the Rio Nosara

The water supply of the Rio Nosara – source of drinking water for the inhabitants of the small town of Hojancha in the central highlands of the Nicoya peninsula – has been reduced by more than 90% in less than 25 years. Only a reforestation of the headwaters promised to reverse this catastrophic development and alleviate the water scarcity in the dry season. 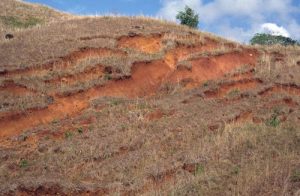 In 1993, committed citizens formed the Fundación Pro Reserva Forestal Monte Alto. In 1994 the Forest Reserve Monte Alto („Zona Protectora Nosara“) with a size of 924 hectares was established. Since then, the Fundación has acquired about 300 hectares of steep inclining slopes within the reserve and let these regenerate naturally or reforested them with native species in mixed cultures. The Fundación´s goal is the reforestation of an area of about 800 hectares. Now, about half of the area is in the process of reforestation.

Since March of 1997, TROPICA VERDE is a member of the Fundación Pro Reserva Forestal Monte Alto. Practical support by TROPICA VERDE involved the 1997 and 1998 purchases of 40 hectares of grazing pastures in the project area, of which 8 hectares were reforested and the rest allowed to regenerate naturally. These and other activities involving planting and nurturing were also made possible by grants from the city of Frankfurt am Main.

The degree of success of this project in the future is decisively contingent upon the dedicated participation of future generations. That is the reason why TROPICA VERDE wants to contribute especially to the funding of activities involving nature conservation and environmental education. 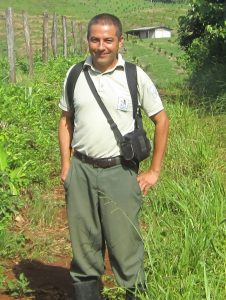 Securing of the drinking water supply and protection of the biodiversity by reforestation of former pasture areas.

Purchase of former hillside pastures in the source region and their reforestation through natural regeneration and afforestation with native, site-adapted species in mixed culture. Support for environmental education measures in the project area.