Forest and Species Conservation in Maquenque,

a breeding area of ​​the Great Military Macaw

Forest Protection in the Breeding Grounds of the Great Green Macaw

About 90 % of the original habitat in the range of the Great Green Macaw has already been destroyed. Only 35 breeding pairs have survived in Costa Rica.

In the last couple of decades, Costa Rica has lost more than half of its original forest cover. Grazing pastures and banana and pineapple plantations have replaced them. In the canton of Sarapiqui, which extends from the central cordillera to the border with Nicaragua, larger primary forest areas merely exist in the highlands and near the river Rio San Juan at the border. It is only here that the original and large diversity of species of the Atlantic lowland rainforests in northern Costa Rica still exists. Jaguars and tapirs have their refuge here. Up to 140 different tree species have been verified per hectare. 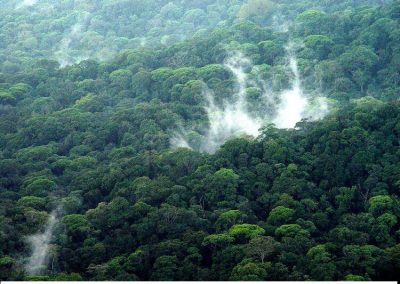 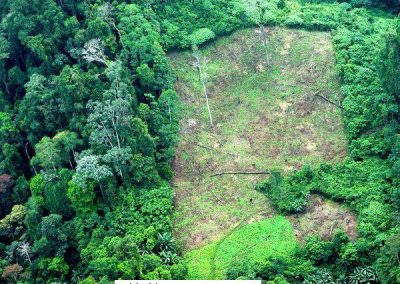 The Great Green Macaw (Ara ambiguus, Spanish: Lapa Verde) has become a symbol of its rich natural heritage and vulnerability. Their population in Costa Rica has been reduced to approximately 35 breeding pairs which breed in the naturally hollow sections of the hardwood Almendro tree (Dipteryx panamensis). The ripe fruits of these giant rainforest trees constitute an important source of nutrition for the Aras, who discriminate when it comes to nutritional requirements and go long distances in order to find ripe fruits.

Large parrots of the species Ara ambiguus originally came from Central America, and the population extended into South America’s north-western region. In vast regions of the original habitat, the “Lapa Verde” has become extinct. The bird is acutely endangered by poaching (especially of young birds which are unscrupulously sold to so-called bird lovers), but especially through logging and the recent spread of pineapple plantations.

As the survival of these fascinating birds can only be secured by conservation of their habitat, they represent an “umbrella species” for the conservation of the primary forests bordering the Rio San Juan and their abundant biodiversity.

“If the Lapa Verde disappears, we can also perish in an ocean of poverty.”    Manuel Rodriguez, Costa Rica’s Minister for the Environment, 2003 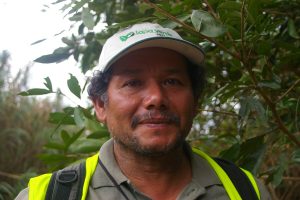 Conservation of the Maquenque Wildlife Sanctuary, home to the breeding grounds of the Great Green Macaw (Ara ambiguus)

The first initiatives were taken by local environmental organizations at the beginning of the 1990s and had as their goal to make the forests along the Rio San Juan a preserve. In 2001, the executive committee of the biological corridor San Juan – La Selva (CBSS) was established to bring together local and regional environmental organizations, municipalities, and the ministry of environment to develop a concept for such a corridor. As the Costa Rican part of the Central American biological corridor, it is meant to connect the approx. 3000 sq. km large Reserva Biológico Indio Maíz in Nicaragua with the national park of Braulio Carrillo in the central cordillera of Costa Rica. The approx. 600 sq. km northern part of the corridor San Juan – La Selva, whose core zone also contains the still existing primary forests along the Rio San Juan, was conceived as future Maquenque national park.

This project failed because of missing public funds for the compensation of property owners. Finally, in May of 2005, the zone which had originally been declared a national park was declared a wildlife sanctuary Refugio Nacional de Vida Silvestre Mixto Maquenque, which as a “refugio mixto” also permits private land ownership in the protected area. One of the main tasks of the executive committee is presently to have the primary forests in the conservation area and breeding grounds of the Great Green Macaw be designated as a “zona de protección absoluta”, i.e. a core zone solely committed to the conservation of endangered species and ecosystems.

The first contacts with the project Maquenque were established in 1997 through acquaintance with Alexander Martinez, who had committed himself since 1985 as voluntary ranger to the conservation of endangered nature in his country, especially the Great Green Macaw. TROPICA VERDE is very grateful for his important contacts and information in connection with its nature conservation activities and his special assistance when visiting the project area. 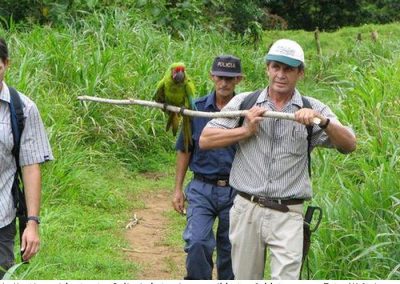 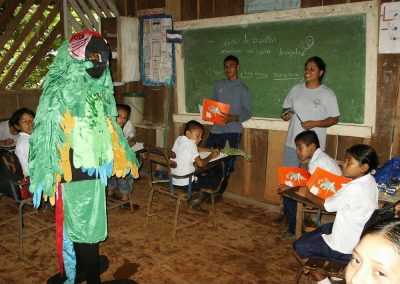 Already in 1999, TROPICA VERDE was able to take a first step in order to protect the core zone of the Maquenque region at the Laguna Tambor by purchasing 103 hectares of primary forests just short of being cleared. Since then, this “Reserva Lapa Verde” is under surveillance by Erasmo Garcia, who, together with his family, lives nearby in a small wooden block house.

TROPICA VERDE works closely together with the executive committee of the biological corridor San Juan – La Selva, especially with Guiselle Monge and Olivier Chassot of the Centro Científico Tropical (CCT), who are in charge of the “Proyecto Lapa Verde”. They, as well as we, are convinced that the protection of nature can only be successful if it is also beneficial for the people living there. This is the reason why we attach high priority to environmental education as a prerequisite for the population participating in the projects. To this end, TROPICA VERDE has supported several workshops in Costa Rica and in the forest areas bordering the project area in Nicaragua since 2004, financed with grants from the Manfred-Hermsen-Stiftung and the City of Frankfurt am Main. Some of the workshops have also been attended by association and board members of TROPICA VERDE.

In addition, TROPICA VERDE funds the newsletter “Hoja de Almendro”, which appears six times a year and informs the population about nature protection in general and the progress of the Maquenque Wildlife Sanctuary and the Great Green Macaw Project in more detail. In 2006, a small house was purchased in the project area. This lodging was essential to allow the executive committee to work without interruptions, and it was financed with donations by members and sponsors.

In 2008 and 2009 TROPICA VERDE was supported by the German Federal Agency for Nature Conservation (BfN) with funds from the German Federal Ministry for the Environment, Nature Conservation and Nuclear Safety (BMU) to support the transboundary cooperation between Costa Rica and Nicaragua to further develop the Binational Biological Corridor El Castillo – San Juan-La Selva. This included a broad awareness campaign focussing on the endangered forests and Great Green Macaws. The successful establishment of a network of schoolchildren in the project region had been a crucial element of the project. As a result, schoolchildren are now supporting the Great Green Macaw Project through regularly monitoring and other conservation measures.