Pineapple – Sunflower with a dark shadow 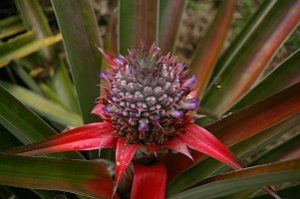 Pineapple is no longer a rarity in the German shopping cart. Thanks to its refreshing sweetness, its vitamin and enzyme richness and its cheap price, the fruit enjoys extreme popularity among domestic consumers. In Germany, about 2.6 kg of pineapple per household were consumed in 2007 (1). According to the United Nations Conference on Trade and Development, Germany was the world’s fourth largest importer of pineapple in 2010 (2).

But the sweet sunflower casts a gloomy shadow. What farming in monocultures means for people and land, how SAN standards should guarantee occupational safety and environmental protection, and how consumers can influence pineapple production, we would like to shed some light on here.

What does growing a fruit mean as „monoculture“?

The cultivation of the pineapple takes place in huge monocultures; Costa Rica is 54,000 hectares used exclusively for the bromeliads (3). This is „single-crop farming“, which means that only one fruit is cultivated over a period of many years and even decades. An advantage of this form of farming is its industrial effectiveness and specialization in cultivation and harvesting. In a crop rotation, an annual change in plant cultivation, for example, would also be purchased other machines and packing stations. The pineapple farms would earn less (4). 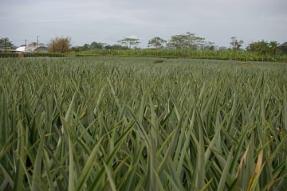 But the single-crop economy brings many disadvantages, as the pineapple cultivation in Costa Rica makes clear: The pineapple plants grow very close together, so that no further vegetation or animal species finds a habitat in the fields. This destroys the ecological balance and makes the pineapple vulnerable to pests. Since pests and diseases are naturally regulated only with changing types of fruit and mixed cultures, monocultures must inevitably combat them with toxic, partially banned, pesticides and fungicides. Since the pesticides used are very unspecific, all life is erased at the same time.

What other consequences does this agricultural form have for the environment?

In order for the huge plantations to develop, a lot of land, unfortunately also rainforest has to be cleared. For forest-dwelling animals and plants thereby the habitat is drastically limited. This leads to a decline in biological diversity. Add to this the following problem: The used, very toxic pesticides are washed out by the heavy rains, which are common in the tropical region, washed out. They poison the drinking and groundwater of the surrounding communities as well as the streams and rivers.

… and the inhabitants of the surrounding villages?

Those who used to be smallholders today sold their fields to Dole, Del Monte, Chiquita or their contract farmers. The former farmers were driven from self-employment to wage labor, often without union protection. The big farmers hire the workers on probation and dismiss them after three months to save on social security contributions (5). 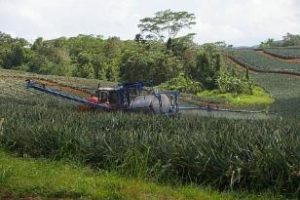 The people in the villages are dependent on water supplies due to the high contamination of the drinking water. Many rural workers, but also schoolchildren complain of headache, body aches and nausea. Leukemia is not a rare disease in these villages. Often workers are not provided with sufficient protective clothing to work with the extremely toxic pesticides. Work under scorching heat or in pouring rain is extremely exhausting. In addition, one can easily inflict injuries on the pointed leaves of the fruit. Skin, eye and nerve damage are the result.

What are SAN standards and how do they influence the situation? 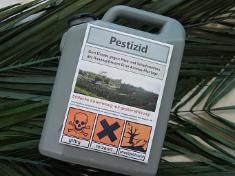 Meanwhile, the big corporations are working together with the Sustainable Agriculture Network, the Sustainable Agricultural Network. This is an association of independent environmental organizations that have developed standards for sustainable agriculture called SAN standards. Farms can purchase certificates that confirm compliance with the SAN criteria. These criteria include aspects that are often neglected by large companies, such as health and good working conditions for workers, conservation of ecosystems and water conservation (6).

It is questionable how these standards can change anything; for example, SAN’s pesticide list listing banned pesticides is outdated. A new, stronger list has been developed. However, this was weakened in the second draft and is now on ice.

As a consumer, can I help myself to improve the situation?

True to the principle „Supply determines demand“, consumers can influence the production behavior of companies. For example, by buying products that are organically grown and fairly traded. The problem with this solution is that environmentally friendly and fair trade pineapple in the German supermarket are hard to find.

If a pineapple is offered to us for € 1.50 or less, it is certainly not fair trade, nor does its cultivation comply with environmental criteria or social standards. That can not afford the final price. Buyers of our major food chains such as ALDI, REWE, EDEKA and LIDL dictate low prices to producers. As a result, they are trying to make a decent income through huge volumes and wage dumping.

So instead of using conventional pineapple, those who do not want to forgo tropical fruit should at least buy organic pineapple or organic mango. The latter are cultivated in Costa Rica namely not in mono but more environmentally friendly mixed crops. However, one should also ask the question, if it is not a local fruit also. For example, a 100-gram apple provides the same energy and vitamins as 100 grams of pineapple (7). Of course that is a limitation in our consumption diversity. But are healthy people and a healthy environment not worth it?